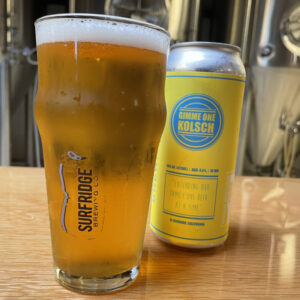 Gimme One Kolsch and Tenebris Stout are both the creations of head brewer Jeremy Montemagni. He describes his Kolsch as an easy drinking, light, crisp beer with slight sweetness and notes of bitterness and an aroma of delicate fruit. It has low pilsner malts and noble hops with a smooth, medium-crip mouthfeel. At an APV of 5%- the Gimme One Kolsch is the perfect easy-drinking summer beer and our most popular pour at the taproom.

The Tenebris Stout has a rich, malty aroma with a bold, full-body malty sweetness with a hint of raisins and plums. One of three stouts currently on tap, this malty imperial stout has an ABV of 10%. 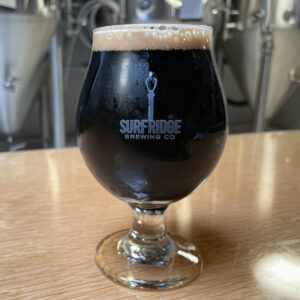 Surfridge Brewing Company is a 20-barrel production brewery opened and operated by Steve and Jennifer Lieberman. Located in the Smokey Hollow neighborhood in El Segundo, California- Surfridge is named after a former seaside community that now serves as a blue butterfly sanctuary.  In 2022 the Lieberman team expanded with their second location in Centerbrook, Connecticut.

Surfridge honors neighborhoods that endure change while staying true to the heritage that fuels them. Learn more about the full line-up of beers made by Surfridge Brewing Company at this link.